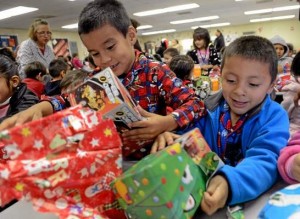 Thanks to the local nonprofit Christmas in the Classroom, 3,200 students, the entire student bodies of four Title 1 elementary schools, received a gift delivered to them by Santa.

Last week Maria Vasquez, who founded the 501c3 in 2004, and many of her community elves, traveled to Juniper and Date Elementary in Fontana, Troth Elementary in Corona and Pomona’s San Antonio Elementary helping Santa with his toy distribution.

“This is so wonderful,” said Selene Amancio, principal of San Antonio. “Our students are so excited. For a lot of them this will be the only gift they receive.”

Last Christmas, there was some question if the program would even happen this year after Vasquez was laid off when her employer closed shop. Her former employer was a huge supporter, through time and donations and the business closure also meant a loss for Christmas in the Classroom.

However Vasquez refused to consider the option of scaling back. Her goal has always been to add schools until every needy child has a Merry Christmas.

“It’s always been about the children,” Vasquez said. “They didn’t stop needing and I couldn’t imagine not being there for them.”

Vasquez said her faith and strength through prayer saw her through the hard times. She was hired by Quad Graphics, Inc. When Quad’s regional operations manager, Ken Eazell learned of Christmas in the Classroom, he caught Vasquez’ passion and with the company, started supporting her efforts.

“She embodies the spirit of the season,” said Eazell, who attended the giveaway at San Antonio. “When she described it to me she started crying. It was heart wrenching to hear about children who have so little. We wanted to help.”

Vasquez also got a boost from Rockview Family Farms who nominated her to the California Milk Processor Board as it celebrated its 20-year anniversary honoring state residents who have improved the quality of life for those around them.

Vasquez and Christmas in the Classroom were chosen and awarded $1,000 — matched by Rockview Farms.

“Maria is a longtime friend of Rockview Farms and her efforts in the community are tremendously honorable,” said Ted DeGroot, Rockview Farms CEO. “Rockview Farms is proud to be affiliated with Maria and to bring holiday cheer to Southern California children this season.”

As Christmas Day grew nearer Vasquez was nervous. She was short of her goal and all out of resources. She turned to the only avenue left to her.

“I prayed,” Vasquez said. “And my prayers were answered.”

Webstract Marketing owners Bill Holcroft and Ravi Khawani heard through a friend about Christmas in the Classroom and donated $1,000, allowing Vasquez to buy the additional gifts needed.

Holcroft, his wife Lynda, daughter Tayler and Khawani all attended the San Antonio event and were moved by the experience.

“It’s just amazing to see all their faces, it takes you back to when you were their age,” Khawani said. “We made a commitment to give back to the community this year, but we had a hard time finding a charity. We reached out to several but we didn’t know what they were going to do with the money. When Bill told me about Maria, I was in. You can not only see where the money goes, but you can be a part of it. To see these kids so happy gets right to your heart.” Donations can be made through: www.christmasintheclassroom.com